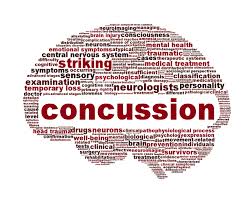 The term concussion refers to an injury to the brain caused by biomechanical forces (often from a sudden stop of movement) that may cause a wide range of symptoms. Today we’re going to discuss what happens during a concussion and current treatment perspectives. The good news about concussions is that the majority of them heal on their own after weeks or months. There is however a subset of people that have residual symptoms causing significant disability. A 2017 review of 36 studies found that between 10% and 56% will exhibit persistent symptoms 3 months after a mild traumatic brain injury (mTBI). Symptoms can be as mild as neck pain, headaches, and fatigue. Other symptoms include dizziness, nausea, double or blurry vision, light or sound sensitivity, numbness, tingling, poor coordination, sleeping problems, memory problems, depression, anxiety, personality changes, and trouble concentration. Unfortunately there is no standardized way of diagnosing concussions. There are no reliable lab markers, and often times imaging of the brain is normal even when there are significant symptoms.

So what causes all these symptoms? To start we’ll go over some basics. Your brain is essentially a free floating blob of jell-o enclosed 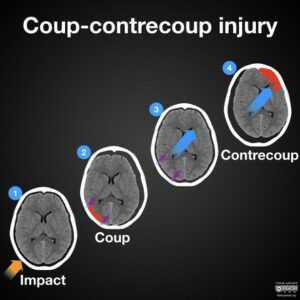 within your oval skull. If your head is impacted, your skull will travel faster than the brain will, causing the brain to collide with the skull. This is called a coup injury. This can ricochet the brain in the opposite direction causing it to impact on the opposite side, which is a counter-coup injury. Because of the oval shape, when the brain contact the skull it will also rotate. This rotation causing a shearing of the axons in the brain. Axons are the branches of neurons that communicate with other neurons. This leads to something called ‘diffuse axonal injury’, which can severely dampen the brains’ ability to communicate with itself. Each brain region gets constant input from

multiple other brain regions, and if the input becomes disrupted it no longer can do its job well. Imagine a game of telephone where 3 people out of a 10 person circle decide to be jerks and say whatever they want. The last guy has no chance of getting accurate information because communication is disrupted, and this is why there is such a broad array of symptoms. The symptoms depend on which regions of the brain are having reduced communication, and thus no 2 concussions can be treated the same.

Current medical standards often call for use of pharmaceuticals to manage symptoms. Examples of this include anti-depressants for depression, vestibular suppressants for dizziness, stimulants for poor concentration, and depressants for insomnia. The good news is that there are treatments available that work to restore the brains ability to communicate between different regions. By performing an in-depth neurological examination looking at all parts of the cerebral cortex, brainstem, and spinal cord we can identify the dysfunctional regions or the system. Then by performing different exercises potentially involving the eyes, inner ear, or body, you can use the functioning parts of the brain to stimulate the damaged parts. This works to improve the communication of the brain through a process called neuroplasticity. Similar to riding a bike, at first it is very difficult because your brain is not accustomed to coordinating balance and coordination in such a manner. Eventually the brain learns to better control the associated areas, and over time makes this new pattern permanent. The same process can be utilized at restoring function to your brain, and as your brain works better, your symptoms will lessen. The most important part is accurately figuring out which areas aren’t working and then identifying the best ways to stimulate them.

Are you ready to alleviate your Concussion symptoms? Call (703) 723-9355 for an appointment with one of our many chiropractors, physical therapists, and acupuncturists that can help!