Tinnitus is the medical term for ringing in the ears. There can be many different causes of tinnitus, ranging from noise damage to the ear from guns or loud concerts to a number neurological syndromes. Unfortunately there is still much to be understood about tinnitus, and often times people are left to deal with the chronic ringing in their ear or ears. Today we’re going to discuss how Chiropractic care may be able to help you with your tinnitus.

Bear with me, we’re going to go into a little neuroanatomy for this one. Hearing starts with the ear, which acts as a funnel for sound vibrations. These vibrations rattle the tympanic membrane, or eardrum, which rattles a system of small bones called o 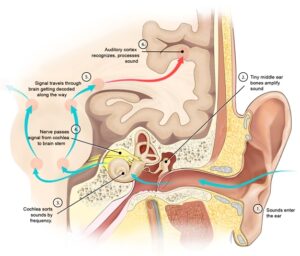 ssicles in the middle ear. This channels the vibrations to the inner ear where the cochlea resides. The cochlea is filled with fluid, and based on the wavelength of the vibration, different neurons in the cochlea will be activated interpreting different pitches of tone. This information is carried to the brainstem by the 8th cranial nerve, where it’s processed in the Cochlear nucleus. Now this is important, because from here the information is sent up to the brain, but it is mixed widely with hearing information from the other side. So if you have ever experienced tinnitus on one side only, the problem has to be somewhere from your ear to this cochlear nucleus, because problems anywhere else will cause tinnitus on both sides….you guys still with me?

What does your chiropractor have to do with all this? Well there are strong and well documented connections between inputs from the muscles and joints in the jaw and neck to the same side cochlear nucleus. This if referred to as “Somatosensory Tinnitus”, and you may have experienced this phenomenon where clenching your jaw, chewing, or turning your neck towards one direction brings on the annoying ringing. It has also been documented in the research that some neck or jaw injuries can directly be associated with same side Tinnitus. Basically what happens is that your neck or jaw have been injured or are not working well. Therefore they send abnormal information up to the brain and brainstem, which may drive abnormal activity in that cochlear nucleus we talked about. And in clinical practice I have seen tinnitus resolve simply by treating and restoring normal function to the muscles and joints of the neck and jaw. Now this does not happen with every case, and this is why it is important to be evaluated by a thorough and knowledgeable practitioner.

Are you interested in getting your Tinnitus evaluated and treated? Call (703)-723-9355 to schedule an appointment with one of our Chiropractors, Physical Therapists, or Acupuncturists to start your journey towards living tinnitus free.